The first quarter results have been a mixed bag so far. Yet, the Indian stock markets have reached an all-time high. While this is an ideal scenario, things don’t seem to be moving as anticipated.

The future will depend on the investments and performance of the capital goods industry, a harbinger of economy growth.

Since the last two years, the capital goods industry has not witnessed any growth. Order books are mostly stagnant or, at times, declining. The core industries – steel and cement – are reeling with 60-70% of the capacity utilization, and as a result, they are not expanding their capacity.

The markets are a good barometer of the future economy, and good news is typically discounted by the market way before the economy starts getting better.

I believe that things are beginning to improve… but at a gradual pace. In the medium term, capital goods 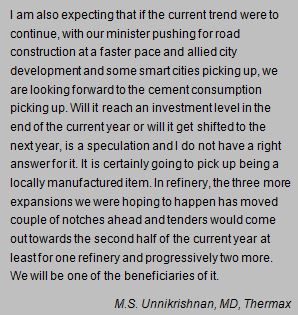 investments will not go into traditional sectors like steel and power, as they are over levered and have over capacity.

Each investment cycle has its own unique drivers. Therefore, one has to look at green shoots – not in the historical capital guzzling sectors but newer ones. For instance, it is quite possible that companies in other sectors will lead the next upturn in private sector investment.

There seems to be a silver lining in the dark clouds for some of the major capital goods companies. If one takes a look at the order book position in 1QFY18, it seems to be improving.

Maybe the green shoots appear ephemeral today, but usually when the cycle is turning, it happens very gradually. Let’s see how this unfolds…