Car makers are increasingly substituting steel with aluminium as a base material. Suppliers of aluminium and manufacturers of auto assemblies and components are gearing up for this.

Aluminium is making inroads into automotives as a ‘material of choice’ as it supports the OEMs’ light-weighting strategies. Jaguar switched to all-aluminium bodies in 2009 with their XJ and XK models. Other luxury brands like BMW, Mercedes-Benz, Porsche and Land Rover soon followed suit. The trend is now catching on among other auto companies as well, with Ford’s F-150 shedding 700 pounds using military-grade aluminium.

The figure below describes the growing use of aluminium in cars. 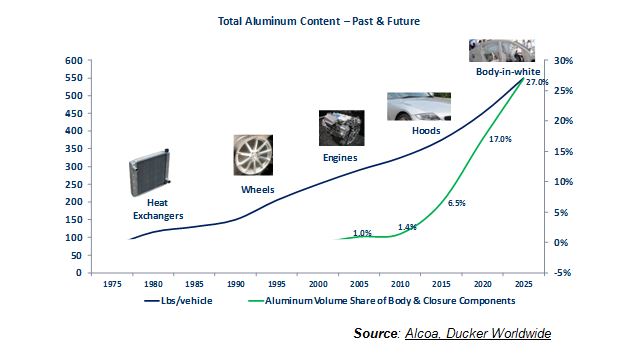 Over the next decade, experts expect that aluminium will have a 27% volume share in the body and closure components of a car. Substituting steel with aluminium could lead to up to a 50% weight reduction. A survey of North American automakers by Ducker Worldwide suggests that automakers will increase their use of aluminium from 327lb (2009) to 550lbs (2025); doubling aluminium’s share of vehicle curb weight from 8% to 16%.

The most important reason for substituting steel with aluminium is its light weight and stiffness that enables car makers to improve vehicle performance and fuel efficiency, and meet the safety and emission targets set by legislators across countries. The US government standards for example, mandate that by 2025, automakers must increase CAFE (Corporate Average Fuel Economy) to 54.5 mpg from 35.5 mpg in 2016.

Other advantages of using aluminium include:

The key obstacle for aluminium application is its cost and price stability. Aluminium alloys are three times more expensive than steel; in assembly costs, aluminium is 20-30% costlier.

The automotive industry in Europe, North America and Japan followed by Korea is likely to lead the material substitution.

Aluminium companies certainly stand to gain from this trend of increasing demand for aluminium. The leading aluminium makers in the US – Alcoa and Constellium – are already investing in new plants to cater to the expected rise in demand. Norsk Hydro ASA, whose customers include Audi, BMW and Daimler, is investing USD 147 million to expand capacity fourfold to an annual 200,000 tons at its Grevenbroich plant in Germany. Manufacturers of auto components and assemblies will also need to adjust to the evolving OEM demand.

Steel manufacturers, on the other hand, threatened by the penetration of aluminium, have developed lighter specialty steel variants which are beginning to find their way into the auto designs.

Watch for our forthcoming blog on specialty steel

Amulya was a senior research analyst at ValueNotes, She worked on competitive intelligence and market sizing research projects for clients in the pharma and BFSI sectors.