Geographical Focus – IndiaSwitchgear and control gear industry to witness CAGR 10% until 2017ValueNotes latest research report on the switchgear and control gear industry in India covers intelligence on the market size, growth, industry trends, industry attractiveness, and Porter’s analysis. The report covers fiscal years 2013 through 2017.India is the fifth largest producer and consumer of electricity in the world, but according to the 11th five year plan, the country was only able to achieve 69% of the planned capacity of 78,700 MW.

In order to overcome this demand and supply deficit, the Indian government has gradually increased the planned capacity addition in the years to come. The rising demand in the power capacity addition is marginally boosting the demand for distribution machinery such as switchgears and control gears. 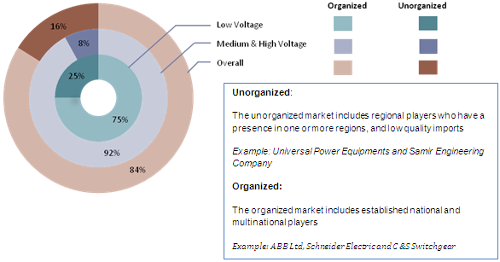 The report includes profiles of the top 5 players with a brief overview about their service offerings, key financial ratios, expansion strategies, etc.

What are the benefits of the report?

Our industry report on the “Switchgear and Control gear in India – 2013-17” does just that. It provides a comprehensive view on how the industry is performing, its market size, growth and drivers and inhibitors contributing to its growth.