The diesel OEMs and auto ancillaries face challenging times ahead due to the reduced price differential between petrol and diesel, government initiatives to reduce pollution and more stringent vehicular emission norms.

Petrol cars are cheaper to manufacture than diesel cars

A diesel engine requires additional components such as turbo chargers and dedicated fuel injection systems to improve its performance and control exhaust emission. This makes it more expensive than petrol cars. The usual price difference between petrol and diesel variants is INR 1-1.5 lakhs. On average, an entry-level diesel car is ~22% costlier than its petrol version.

The difference in price between petrol and diesel has come down

Since diesel was earlier priced significantly lower than petrol, buyers of the costlier diesel cars expected to save on fuel costs in the long run. As the price gap between petrol and diesel has narrowed, diesel cars no longer make economic sense. The price gap between petrol and diesel was down to INR 15 per litre in January 2016 from INR 18 in January 2014. The gap is expected to further narrow, going forward.

Anti-pollution initiatives of the government

National Green Tribunal (NGT) proposed an order in April 2015 to ban diesel vehicles older than 10 years in Delhi-NCR. This has reduced the resale value of diesel cars and further reduced their attractiveness.

A diesel car emits 5-10 times more particulate matter (PM) and 2-3 times more nitrogen oxide (NOx) than a petrol car. Currently, India has laid down BS IV emission norms in 14 major cities and BS III norms in the rest of the country. Even if India moves to emission norms similar to Euro 5 (implemented in 2009 in Europe), it requires a minimum cut in PM emissions of 80% for diesel cars.Diesel car manufacturers will need to invest more in R&D for diesel engines to meet the permissible emission levels, thus raising the cost of the cars to the customer.

Despite a small recovery in the auto industry in 2015, the manufacturing capacities of most OEMs are under-utilized due to a fall in the demand for diesel cars. This has had an adverse impact on the bottom lines of auto OEMs. 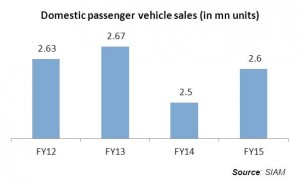 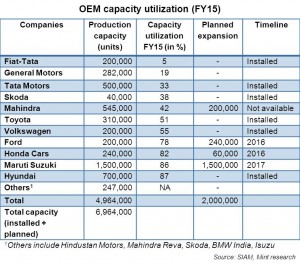 OEMs are therefore finding it increasingly difficult to sell their diesel variants. Some of them are beginning to reduce or shut down their diesel lines. General Motors, for instance, has announced that it will shut down its Halol (Gujarat) plant by H2 2016.

I have worked on market research projects in the auto, manufacturing and engineering sectors. I have a B.E. in mechanical engineering and an MBA in marketing from the University of Pune. You can contact me on rohan@valuenotes.co.in or through LinkedIn.