Home > How green is the new GST regime?

India ranks only behind China and the United States as the third-largest emitter of carbon dioxide. With its ambitious goal to electrify all vehicles by 2030, and to create 175 GW of renewable energy capacity by 2022 (up from 57 GW in 2016-17), is the Indian government doing enough to help achieve these goals? Perhaps not, if we take a closer look at some of the goods and services tax (GST) rates announced last month.

Starting July 1, when GST is rolled out, electric vehicles will continue to attract a 12% tax. Hybrid vehicles will be taxed at the same rate as petrol and diesel cars i.e. 28% (plus a 15% cess). Interestingly yachts, rowing boats, canoesand aircrafts – used for pleasure or sport – will also be taxed at 28%. It is unlikely this will help the country move towards a sustainable mobility pathway. 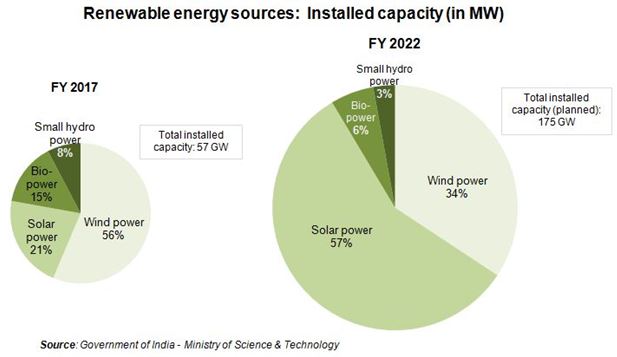 The GST rates announced for renewal energy is another area that gives us confusing signals. India’s aim is to reduce its dependence on fossil fuels. According to a note put out by the Ministry of New and Renewable Energy, as of March 2017 the country’s cumulative grid interactive or grid tied renewable energy capacity (excluding large hydropower) reached 57 GW. Of this, 57% came from wind, and 21% from solar.

The Indian government has set a target of 175 GW renewable power installed capacity by the end of 2022 – 60 GW from wind power, 100 GW from solar power, 10 GW from biomass power and 5 GW from small hydro power.To meet this 2022 target, the renewable energy sector in India will require $189 billion additional investment.

Why then are renewable energy devices and spare parts for their manufacture– viz. bio-gas plant, solar power devices,and generating systems and wind mills – attracting a GST rate of 5%?

With noble plans for a greener future, is the Indian government contradicting itself given the proposed GST regime?