Home > Will India get it REIT?

Until recently, ‘real estate’ was a dirty word in India, ridden with corruption, unaccounted cash, delays in construction deadlines, and an over-dependence of developers on friends and other informal sources of finance to fund their projects…the list goes on. Today, the opportunities the sector offers are potentially optimistic; the reason why private equity (PE) firms and other investors will be more than happy to park their money in realty. 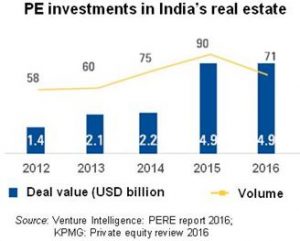 India’s real estate sector is set for a major makeover and will see a huge boost in investments. Data from Venture Intelligence shows that although the number of disclosed investments by Private Equity-Real Estate firms dropped in 2016, Brookfield’s buyout of Hiranandani Group’s commercial space was the single biggest investment so far in the sector. According to Knight Frank, more than half the investments propping up India’s property market came from PE firms; compare that to 2010, when it was merely a fifth. Banks, which accounted for over 50% of the sector’s funding, dropped to ~25% in the last two years. With bad debts plaguing their books and mounting losses faced by builders, banks aren’t going to be funding real estate projects in a rush.

With affordable housing likely to receive infrastructure status, the country’s housing challenge may soon be addressed by the promised “Housing for All by 2022” scheme. The Indian government recently announced the Real Estate Regulation Act (RERA), which will protect consumers and investors from project delays and malpractices – both considered the norm in the industry.

Soon, the introduction of SEBI-regulated real estate investment trusts (or REITs) will become a reality, providing a safe investment option for investors. A report – titled REIT-able Space in India: A Closer Reality – published in March this year, estimates that approximately USD 121 billion or 1.73 billion sq. ft. of commercial real estate such as warehousing, retail malls, and school buildings, could potentially benefit from the REIT opportunities.

Noises can already be heard in the real estate investment trust space… RMZ Corp, backed by sovereign wealth fund Qatar Investment Authority, is preparing to launch an REIT. Private equity firm Blackstone Group is likely to list two REITs later this year – one with Panchshil Real Estate, and the other with Embassy Property. DLF, India’s largest property developer, is in exclusive talks with GIC (Singapore’s sovereign wealth fund) to sell a 40% stake.

With the imminent launch of REITs, retail investors will get an opportunity to participate in India’s growth story, without the hassles that are synonymous with buying physical real estate.