Home > Urbanisation and the housing challenge

27 Oct 16 Urbanisation and the housing challenge

According to a recent UN-Habitat report on urbanisation and development, urbanization and growth go hand in hand, and urbanization is essential for socioeconomic transformation, wealth generation, prosperity and development. India, no doubt, is urbanising at a rapid rate. The country is currently home to ~400 million urban dwellers; an additional 300 million will be added by 2050. The government must prepare for this influx…

No surprises, then, why India’s urban housing shortage (currently pegged at 19 million) is projected to be north of 40 million by 2022 – these are conservative estimates and do not take into account the kutcha homes that offer sub-standard living and need upgrading. Yet, real estate developers have plenty of unsold inventory, with some estimates claiming these numbers have touched a 10-year high. This demand-supply gap is primarily due to the gigantic shortage of affordable housing i.e. properties in the Rs. 20-50 lakh price segment.

Owning a home in urban India is virtually unaffordable for many in the middle- and low-income groups. Real estate development is ridden with bottlenecks leading to inflated property prices. A shortage of suitable plots of land, high land prices, lengthy approval processes, absence of accredited planners, and the lack of private participation are some of the factors responsible for driving up prices. The Indian government recently announced a series of initiatives to spur growth in the affordable housing segment:

Given the slowdown in India’s real estate sector, private players have entered the affordable space. The Shapoorji Pallonji Group, for instance, announced earlier this year that they would build 20,000 affordable homes over the next seven years. Tata Housing and Godrej Lifespace are some of the other players in this segment. 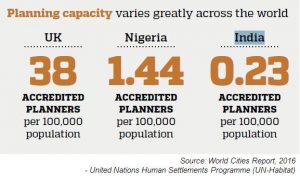 The government must continue to do all that it can to encourage development in the affordable housing segment. The opportunities are immense for real estate developers and players in the building materials sector – whether it is suppliers of sanitary ware, tiles, lifts, door frames & windows, paints, pipes & plumbing, electricals…

An area that is often given little importance is urban planning. There is an urgent need for qualified urban planners in India. While planning capacity varies greatly across the world, the ratio is abysmally low in the country. According to statistics from 2011, the country had just 0.23 accredited planners per 100,000 population. Compare that with the UK which is estimated to have 38 accredited planners per 100,000 population.

As a project manager, I've worked on a variety of research studies - competitive intelligence, market sizing, voice of customer... across industries such as BFSI, publishing, IT/BPO, etc. Do get in touch with me on saad@valuenotes.co.in or through my LinkedIn profile