Today’s popular mega-trends are almost invariably linked to technology. Common buzz-words are artificial intelligence (AI), robotics, IoT, data, analytics, “smart” objects, the gig economy, electrification, digitization, and so on. Technology is of course, a major disrupter – but there are other non-tech trends that are definitely “mega”!

Amongst these, one of the more neglected is urbanization – and more particularly, the need for urban infrastructure.

By 2050, two-thirds or more of the global population will live in cities, up from a little over half today. In the next few decades, urban infrastructure will account for more than two-thirds of total infrastructure demand. Some estimates put this at more than USD 60 trillion till 2040.

And the biggest cities are getting even bigger, outgrowing their historic geographic boundaries. Tomorrow’s mega-cities (like Mumbai, Mexico, Shanghai) will have populations in excess of 50 million by 2050 (including neighbouring contiguous areas). Not only that – some of the biggest cities in the world are under-invested in infrastructure and literally falling apart. We spend hours in traffic, sewage is not treated, water supply is erratic, air is polluted, and quality of life is deteriorating. And most of these cities are in the fastest growing regions. 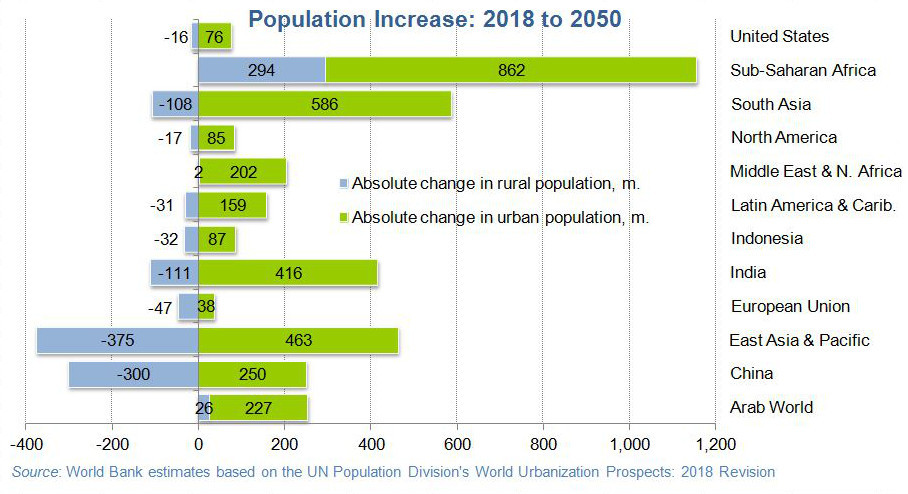 Clearly, the opportunity is huge. Broad categories include:

Linked to this is the opportunity for a zillion widgets and services that go into these; from pipes to trains to buses to streetlights to CCTV cameras to cement… the list is endless!

Governments and politicians face many calls for investment, and their decision is often based on what might make them look good, as opposed to what is really needed. Showpiece projects like continental railways or high-speed trains tend to get greater prominence. Ultimately, there is nothing glamorous about sewage treatment!

The challenges are daunting! Multiple levels of government affect cities (local, state, country). Most cities are unable to raise adequate funding, or evolve sustainable or bankable projects to attract private or alternate funding. At the root of this is political inability to charge for these services. Further, cities lack capabilities for developing such infrastructure.

Sadly, the cities that need the most money are in Africa, which will have the biggest spurt in urban population. Asia is likely to do a little better, but demand is likely to outstrip supply (with the possible exception of China, among the big countries). [The absolute decline in rural populations is also interesting, and merits a separate discussion. Only Africa and the Arab World will have rural populations greater than they have today.]

Big opportunities are often linked to big challenges. Figuring out how to bring investment to urban infrastructure will not only provide a huge boost to GDP and prospects for a large number of businesses, but also substantially improve the quality of life for billions.