Time has always been the most important and scarce resource for any corporate organization. Whether it is a manufacturing facility or a service provider, all the efforts are aimed at reducing operational time and enhancing productivity. If we talk about research services; it’s no exception. Any company looking at a research report would want it to be crisp and information rich. Nobody has the time to go through a 100 page report with lot of text and scattered data. Most of the market studies and surveys these days are presented in brief 20-30 slide presentations. It is important for research companies to capture all the relevant information in short but descriptive slides. Thus immaculate planning becomes imperative! But this is easier said than done – how does one determine how the end product will look like? Many times a lot of time is wasted in rearranging, formatting and designing slides and in the end this is what throws the project over budget.

If we look at the traditional approach of report writing, the first draft consists of a table of contents (ToC). And everything else follows. The ToC enables the researcher to device a structure and scope of the report. But it has its own limitations especially when the final deliverable is in the form of a presentation. There is no scope of graphical representation in traditional ToCs. Also, there is limited foresight in expecting further analysis out of the given scope and available data.

To overcome such limitations, here in ValueNotes, we use a slide deck design (SDD) mechanism. Now you will wonder what is an SDD? How is it drafted? How is it different from a ToC? Here is an example of an SDD that we created during one of our projects wherein we had to study the market for an electric component: 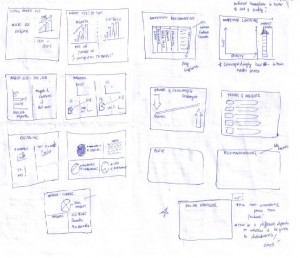 An SDD is a simple yet very effective method of putting pen to paper. Here you conceptualize the slides on a piece of paper at the beginning of the project without actually making a slide on your computer. It shows how the slides will look like when it is ready to be delivered. You need not be an expert artist to draft such a deck. It is just an indicative picture of your final output. It is an extension to the project setup in addition to the ToC.

For example in the diagram shown above, we were able to picture the number of graphs & pie charts well in advance. We knew how many of such diagrams were required to depict the findings of our report. It also gives you opportunity in the hind sight to look at the further analysis which, if by mistake, was left during the initial project plan. It also eradicates the gap of understanding between the analyst and the project manager. To put it in simple words, in many cases in the past we have seen that the analyst and the manager are in agreement of the content in the beginning but both of them perceive it in different ways in their heads. By creating a visual representation like this the analyst knows what exactly is expected out of his efforts in making a presentation. It saves a lot of time in doing reworks. It really helps when all the members of the team are on the same page and look at the same picture! As Aristotle once said “The soul never thinks without a picture!”