Home > Can the new take over norms turn the tide for plunging Indian M&A?

01 Aug 11 Can the new take over norms turn the tide for plunging Indian M&A?

For quite some time now financial experts have been predicting that the M&A scenario in India will significantly improve. Investment bankers have already run the ‘India growth’ story ragged and investment banks are again on a hiring spree expecting an increase in the deal flow. But factual data suggests otherwise! 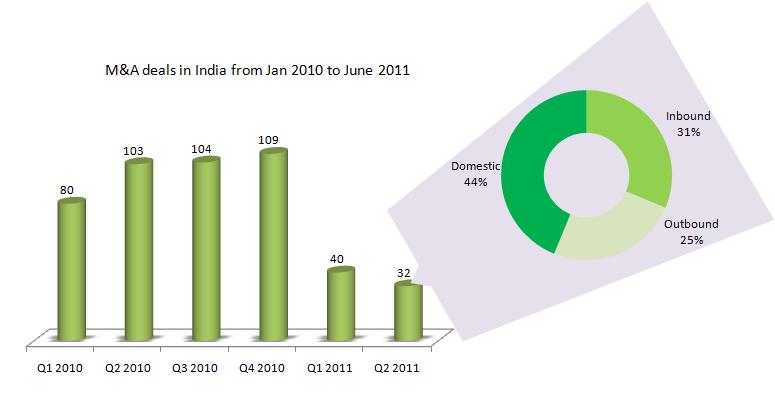 The biggest deal of the quarter was Private equity firm Apollo Global Management agreeing to make an investment of around USD 300m in Indian conglomerate Welspun Group. Other major deals included Crompton Greaves (CG) acquiring the Swedish drives manufacturer Emotron for USD 84.5m from Polaris Private Equity and Cambridge Solutions selling its BPO division to Xchanging Technology Services India Pvt. Ltd, an indirect wholly owned subsidiary of Xchanging, UK for USD 66m. But the quarter did not see any big ticket deal like the USD 7.2bn Reliance-BP deal which was announced in Feb 2011.

Blame for the decline in deals over the last two quarters can be put on the tattered stock market sentiments, concerns over India’s GDP growth and the burgeoning inflation. Inflation has been one of the biggest problems, as the RBI has increased rates 11 times in the past one and half year in an unsuccessful effort to arrest inflation.

But now the SEBI has come up with new take over norms which are expected to simplify and boost mergers and acquisitions in India. As per the new rules investors are allowed to buy up to 25%, up from the current 15% threshold, without having to make a public offer to buy additional shares. It also raised the mandatory offer to 26% from the existing 20%. In Japan, the trigger for an open offer is 33.3%, in Hong Kong 30%, in Singapore 29.99%, while in the UK it is 30%. However, in these countries the trigger forces the buyer to make an offer for the entire company. Thus India could be a very attractive target for private equities who want to invest in acquiring chunky minority stakes but not buy out the entire public listed company.

Further the SEBI has also abolished the practice of paying a ‘non- compete fee’ to owners of acquired companies making the new rules more minority friendly. Previously payments of up to 25% over the open offer price were allowed to be paid in order to stop founders from competing.

These new norms are expected to improve the deal making environment as it would enhance the seriousness and relevance of firms making open public offers. Thus with the new takeover norms coming into effect soon, it will be interesting to see how the next quarter pans out. My hunch is we could see a rise in in-bound deals as well as deals involving private equity players who are looking for large minority stakes in Indian companies.