Home > Does the Indian economy need a slaughter ban?

15 Jun 17 Does the Indian economy need a slaughter ban?

The recent ban on the sale and purchase of cattle from animal markets for slaughter by the union government might resonate with many Indians. However, it will have a considerable impact on India’s economy and the livelihoods of millions of Indians, including many loyal BJP supporters. Before I start to write about the possible impact, let us have a look at the production of various meats in India. The slaughter ban is only limited to cattle which includes bovines (cows, buffaloes, calf, bulls).

Though it is obvious that the ban is going to impact employment and the exports of leather and meat from India, let’s see the magnitude of this impact. 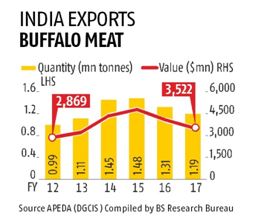 1. Meat exports
India is the largest beef exporter in the world and 70% of the meat exported is buffalo. The country’s buffalo meat export in FY2016-17 was ~USD 3.5 bn. Since FY14-15, the exports have been declining.

Any ban on slaughter of buffaloes will have further impact on meat exports.

2. Leather exports
The Indian leather and leather products exports have fallen by 10% to 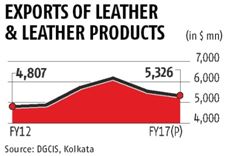 The leather industry in Uttar Pradesh, which is estimated at USD 2.6 bn, is already feeling the pressure due to a supply shortage of raw hide following the ban and the subsequent closure of illegal abattoirs in the state. The slaughter ban will hurt the leather trade further.

For example, the Kanpur cluster depends 80% on buffalo hide, the 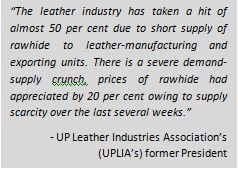 primary raw material. In case of shortages of raw material, the loss in the leather trade in India will be an opportunity for countries like Bangladesh, Vietnam, Pakistan and China.

3. Employment
Millions of people work in the Indian slaughter industry directly and indirectly. According to an article in the Hindustan Times, just in UP, there are 2.5 million people associated with this industry. The livelihood of these people is under severe pressure and that is the biggest impact.

A look at the data compiled by Business Standard of relevant quarterly figures for growth (in gross value added at basic prices, adjusted for base year 2011-12) –

When the Indian economy is already reeling under pressure from various headwinds – under-capitalized banks, ever-increasing bad loans, negligible private sector Capex, demonetization, etc., do you think a slaughter ban is the right thing to do?