In 2013, Angelina Jolie underwent a double mastectomy and in 2015 a surgical removal of ovaries and fallopian tubes. In support of these decisions, Jolie said, “I know my children will never have to say, ‘Mom died of ovarian cancer’!” 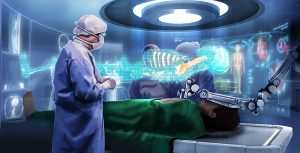 This type of a scenario would have been unimaginable even a decade ago. So what was the basis of her decision to have these preventive surgeries? A blood test that revealed high levels of inflammatory markers which could be early signs of cancer and a genetic test that revealed she had gene mutation called BRCA1 which put her at high risk for breast and ovarian cancers.

For years diagnosis was an area that was left to a doctor’s skills, experience and intuition, and was almost always after the fact. However, major breakthroughs in diagnostic testing and technological advancements in Big Data analysis and Artificial Intelligence (AI) have paved the way for improved diagnostics and pre-emptive care.

Today physicians have access to large volumes of shared patient data and research papers and other information across geographies. However, to read and analyse all this requires a lot of effort. That is where AI comes in.

IBM’s Watson, a super computer powered with artificial intelligence, recently created waves by correctly diagnosing a medical mystery within minutes, something doctors had failed to do for months. A Japanese female patient suffering from leukaemia was not responding to the prescribed treatment. The doctors had no options left. As a last resort, the team decided to use IBM Watson’s AI tool and it proved to be a life-saver for the patient. It took IBM Watson just about ten minutes to study the patient’s medical information and cross-reference her condition against 20 million oncology records and diagnose that the patient actually had a different form of leukaemia than first diagnosed and required different treatment. This new treatment proved far more effective than original methods.

Another such AI tool in development is Google DeepMind, which attempts to accurately diagnose early signs of visual degeneration through analysis of over a million eye scans. The main aim is to find the symptoms of visual problems caused by diabetes and age-related sight degeneration. Diabetic sight loss is one of the most widespread and severe kinds of blindness around the globe. Mustafa Suleyman, co-founder of DeepMind, hopes that early detection of the disease will enable doctors to prevent 98% of this kind of blindness in the world.
Image Source : https://www.brother.co.uk/business-solutions/healthcare/future-of-hospital-technology
AI tools are also making headway into the online consultation space. Babylon Health, a U.K. start-up that offers a digital healthcare app via a mixture of artificial intelligence and video and text consultations with doctors and specialists, is on a trial with the National Health Service (NHS) to replace the 111 telephone helpline that patients call to get healthcare advice. Patients will be now be able to chat with Babylon’s AI-powered chatbot and get their symptoms checked instantly, and get appropriate advice on the course of action to be taken.

The use of big data and artificial intelligence in the medical field has the potential to bring about a revolutionary change. Will AI replace human doctors in the future? Well, that is a question that many experts are trying to answer. Whatever the future holds, AI is proving to be a disrupter in the way humans manage healthcare.

I’ve been with ValueNotes for over a decade – now, as a senior research solutions consultant; and prior to that, as part of the research team. My forte is understanding clients’ business problems, studying their industries, and finally designing the most suitable solution for their research need (within their budget!)