15 May 18 How will wireless mobile empower India’s society?

Twenty years ago, a telephone in an Indian home was a luxury (there were a mere 19 million subscribers in the country at the time). Today, pretty much everyone has a mobile phone. 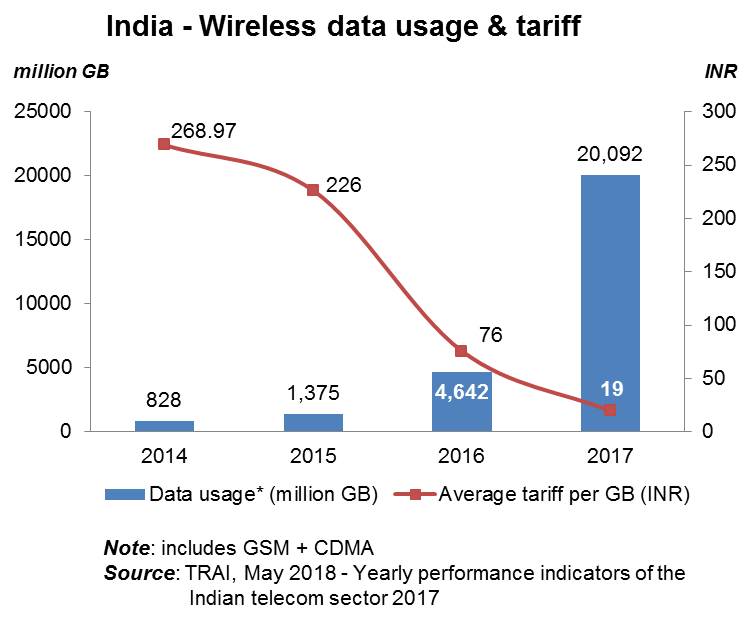 According to TRAI, India’s telecom regulator, the country had 1.17 billion wireless subscribers at the end of 2017. One particular statistic stood out and that was the average data usage per active user per month. There’s been an explosive growth in just one year – from 1.18 GB in 2016 to 4.13 GB by the end of 2017, taking the total to over 20 billion GB! And prices have fallen to under 30 cents for 1 GB of data.

Much credit has been given to Reliance Jio’s aggressive launch in 2016, which resulted in a shift in the mobile market – from voice to data. The exponential growth in wireless data consumption will no doubt empower society – create jobs, stimulate financial inclusion, and promote better education, agriculture production, and health. We’re already seeing signs of significant social impact –

And of course there’s the government’s Digital India initiative that’s brought millions of unbanked people into the financial system through the Jan Dhan Yojana scheme and the Unified Payment Interface (UPI). The latter allows anyone with a valid bank account to transfer funds and make payments on a single platform. Let’s pause for a moment to think of what could happen when WhatsApp (with over 200 million users in India) rolls out its UPI-based payment feature. A living example is China, where mobile payment transactions reached US$12.8 trillion from January to October last year, dwarfing the records set by the US.

The penetration of smartphones in India was just 33% at the end of 2017. By 2025, GSM Association estimates that the country will be the second largest smartphone market with a billion users. With room for many more 3G subscribers and talk of 5G, (near unlimited) data plans at under five dollars and cheaper smartphones, the future story isn’t about numbers and mobile technology – but its impact on communities, society and the economy.