Home > ‘LED’ spotlight – at the bottom of the pyramid!

Till about 5 years ago, whenever I read the term “LED”, the first thing that came to my mind was a fancy imported television. When I came across this term in the beginning of 2011, the first thing to cross my mind was luxurious rich daddy lighting in a lavish mansion. But when I was talking to Mr. V. Muthuswamy, Secretary – LED Manufacturers’ Association (LEDMA), for one of the recent projects we did, I was really surprised to know that LEDs (lamps & luminaries) are expected to contribute nearly 18-20% to the total lighting industry in India by 2020. Now that’s really something, as LEDs currently contribute to less than 3-4% to the USD 2bn* Indian lighting industry.

According to Mr. Muthuswamy, the growth in LED market will be driven by public awareness moving towards energy efficient & eco friendly lighting systems and initiatives taken by the Government. Currently more than 50% of LED lights are procured by the Government and it is playing a vital role in getting LEDs to the forefront of Indian lighting industry. Many state Governments have replaced traditional street lights with solar LED street lights, which are very energy efficient and save a lot of money. The traditional street light consumes high amount of energy, converting only about 20% of energy into light and the rest into heat. Though the initial cost of replacement is very high, the kind of money saved by using less energy is high and beneficial in the long run. LEDs have a longer life when compared to traditional lights, which saves a lot of money in maintenance and repair for the Government. The maximum demand for LEDs rolls up from outdoor lighting (more than 50%), while the demand from indoor segment is still not picking up. 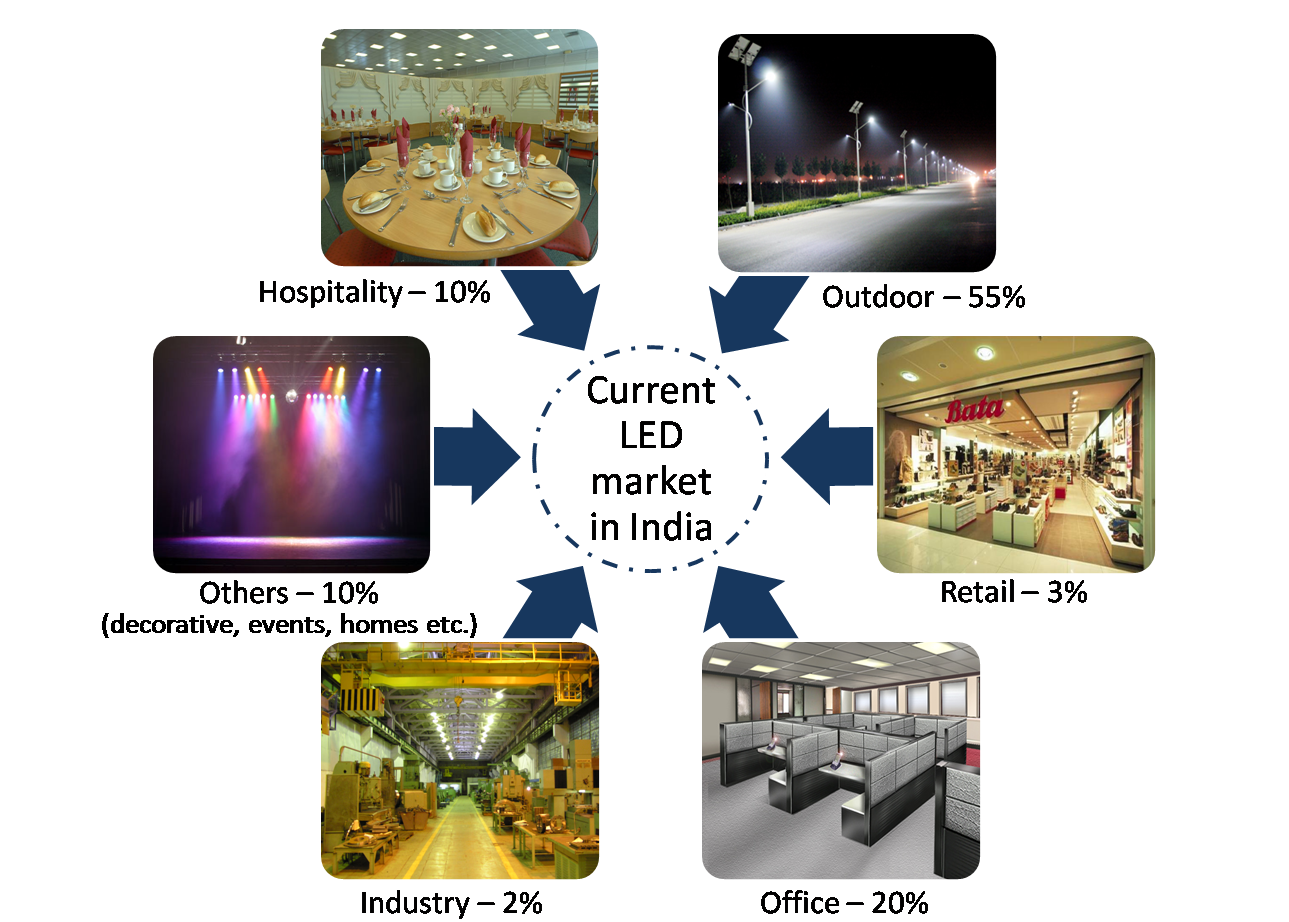 Currently the LED manufacturing scenario in India is pretty fragmented with around 7-8 big companies like Osram, Crompton Greaves & Havells and more than 50 small and medium companies. Most of these companies currently assemble the lamps while importing the chips. However, drivers (one of the key components) for LEDs are either manufactured locally or imported from China. Smaller companies like MIC Electronics & Samudra Electronics are exclusive LED manufacturers that have recently started operations but are enjoying a YoY growth of more than 80%. These growth figures have tempted many new entrants and many new LED manufacturing companies have mushroomed in India over the last two years. But despite impressive growth figures, these companies face various challenges in the Indian market.

LEDs are currently very expensive in India as the chips are still imported. There are only 5 manufacturers of LED chips around the world and it would take a while for its production to start in India. The cost of one 16 watt LED is around INR 600 which is almost 15 times the cost of a CFL with same lumen output. The Indian consumer is very cost conscious and cost is one of the major reasons why LEDs have not been accepted widely by households.

Another reason is the existing lighting infrastructure in homes and offices. Switching from traditional retrofit lights to LEDs requires reasonable amount of money, and the majority of Indian middleclass cannot afford that.

Most of the big orders for LEDs currently come from government tenders. And as it is commonly know, it’s not easy to win such contracts, without having ‘contacts’ or by using unethical methods.

Switch to LEDs is imperative

Despite these challenges, LED sales in India grew by 70-80% p.a. in the last 2-3 years, and this growth is expected to continue for another 4-5 years. Once the production of diodes & chips starts in India the prices will drastically come down making it affordable for the common man. Further the prices of LED lights are expected to fall by about 10-12% due to the budgetary proposal to reduce excise duty on LED bulbs from 10% to 5% and full exemption on the special CVD of 4%. The same thing happened with CFLs some 7-8 years ago, and now they are available at affordable prices. This is good news for local as well as foreign manufacturers of LEDs.

The government is trying to push sales of LEDs, but LED manufacturers as well as their association, LEDMA, need to work on developing affordable retail products. They also need to educate retail consumers about the long term advantages of using LEDs against traditional lighting products. The future of LEDs would be bright only if it is widely accepted by the burgeoning middle class. In the words of C.K. Prahalad, an internationally renowned management guru, “The fortune lies at the bottom of the pyramid”. This stands true for the LED market in India.

* Does not include traffic signals, display, mobile devices & automotives.