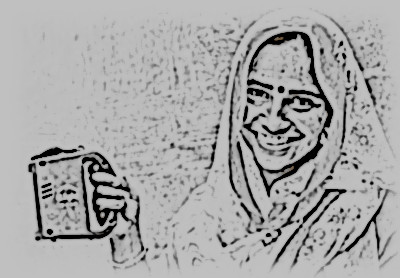 There is no doubt that the banking industry in India has come a long way especially after embracing modern technology. However, Indian banks face unique challenges in terms of rural customers and financial inclusion in rural India. RBI had carried out researches on an all India basis and came up with the following figures: “59% of the adult population in the country has bank accounts and 41% don’t. In rural areas, the coverage of banks is 39%, against 60% in urban areas. There is only one bank for a population of 13,000.” (Source: The ViewsPaper, Growth and Banking Development in India, 2009)

Penetration of financial services is low in urban and rural India. The real problem is that banks cannot reach the rural population due to limited access to organized / affordable financial services. It is important for the banks to access the rural market and provide services, especially credit and insurance, since it will eventually increase livelihood opportunities. I feel rural markets can operate efficiently only if customers are provided with some sort of financial literacy from banks or state governments. According to a report by Punjab National Bank, “financial literacy (from a regulatory perspective), empowers the common person and reduces the burden of protecting him/her from elements of market failures. Financially educated customers can benefit the economy by encouraging genuine competition and forcing service providers to improve their levels of efficiency.”

RBI initiative – Project Financial Literacy: Project Financial Literacy includes financial education to the rural poor through various medium. These include films, games, cartoons etc. which could appeal to the rural audience. Its main objective is to spread financial information about the central bank and general banking concepts to target groups such as women, self help groups etc.

However, there is still a lot to be done. The government needs to ensure the distribution is spread across widely with the appointment of counselors from local areas that have the trust people of the people (and the right qualification).

Banking in rural market – Product customization needed: Due to financial illiteracy, rural customers prefer post office schemes and bank fixed deposits over equity. As pointed out by Vikaas Sachdeva’s blog “The road to financial inclusion in a rural household usually follows the path: savings account, fixed deposit, agriculture credit, insurance, auto loan etc. in that order. Investments in mutual funds are towards the end of this path. It’s a journey from “needs” to “luxury” for most rural households.”

Some examples of bank initiatives include ICICI Bank – which focuses on financial support to farmers, traders, commission agents, small processors etc. After its merger with Bank of Rajasthan, ICICI Bank will increase its focus further on rural and semi urban areas (BoR has a total of 463 branches – 40% are located in rural and semi-urban areas). Similarly, LIC announced recently its plans to enter into rural housing loan market. LIC would use a different approach in providing loans – the firm will not spend too much on setting up each office (roughly Rs. 1 lakh), no income statement provision required when giving loans and no location advantages (like water supply, electricity etc.) would be considered when providing loans.

However, more initiatives from financial institutions are needed to provide further support in rural areas.

Future of rural banking – Modern technology: Large number of rural Indians are using mobile phones. According to TRAI, rural wireless subscriber base was 93.15 million (as on Dec 2008) which grew to 164.57 million in 2009 – an increase by 76.7%. The proportion of rural to urban subscribers is 31:69 – This shows a large untapped market to reach rural customers. Mobile banking can cut down costs (mobile phone for banking operations = branchless banking), as physical infrastructure and human resources wouldn’t be needed, which is a problem in rural areas and a major constraint in carrying out banking operations.

With the above initiatives, banks will be able to reach out to 70% of the Indian population. I strongly feel that financial literacy should be considered as one of the first steps by banks and state government to access the low income segment and rural masses followed by technological innovations such as mobile banking. Eventually, the effects will be measured via GDP growth, new jobs and income generations, better healthcare for themselves and their communities.

Tina was a research analyst with ValueNotes.