The rise of post-truth (whatever that’s supposed to mean) and Donald Trump have led to reams of opinion on the question – Can Trumponomics stop globalization? And Trump is just the latest symptom. We also have Brexit, and an ever-increasing number of nationalistic movements in Europe and elsewhere.

Little wonder that many are predicting the imminent demise of globalization. And Trump’s recent actions only serve to bolster that theory.

But what exactly is globalization? And is it only a 20th century phenomenon, best described by WTO and the rise of China? 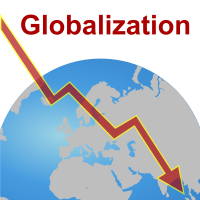 Globalization is not a recent phenomenon. It has evolved over centuries – ever since traders set out on mules or wagons or ships to distant places. Initially, trade was driven by products that were unique or not available in home countries. Later, it was driven by cost or colonization or whatever – but always with an underlying profit motive.

A couple of hundred years ago, India and China jointly commanded over 50% of the global economy. But with the benefits of industrialization and gunpowder, Western countries grew dominant – and more dominant. The current rules of trade or intellectual property or international law have been written by the US and European powers, and developing nations had no choice but to comply.

Since the late 20th century, globalization has taken a huge turn. Thanks to rapid advances first in transportation, and then the earth-flattening Internet/telecom revolution – both knowledge and customer access are no longer insurmountable barriers. Secondly, many emerging economies have learnt the rules of the game.

So now, globalization is being blamed for greater inequality, stagnant growth, and loss of jobs in many developed nations. This may or may not be true – in poor countries, many people feel that they’ve been exploited by big Western multinationals. In an earlier era, traditional economies in China, India, Africa or Asia were decimated by colonial powers seeking to enrich themselves.

The point here is not to make a moral judgment, or discuss the merits (or otherwise) of globalization. The strong will always exploit competitive advantages for their own gain, and human nature will ensure this continues. Globalization is a “mega-trend” that has lasted centuries. Various nations have tried to fight this trend, and failed. Isolationism and trade barriers have resulted in countries going bust – remember USSR? More recently, we have the sad case of Venezuela!

New visa rules or broken trade agreements could well create chaos. But are these really altering the overall direction? Or – just another bargaining tactic by a powerful player that seeks to retain its advantages, whether fair or unfair? After all, every country and company is always trying to negotiate the best deal for itself – and everything is fair, as long as they can get away with it.

As long as there are wage or cost differences or other arbitrage opportunities, opportunistic entrepreneurs (or greedy corporations) will fill the gap. Technology has made the world even smaller, and will keep doing so. Walls and visas cannot stop the movement of software, or knowledge, or money!