Home > The Power of observation in market research

17 Apr 17 The Power of observation in market research

Many a time we choose to ignore the shifts in the marketplace. They are so conspicuous that we take them for granted, and we rarely consider their impact. One does not need to be a star market research analyst to do that. It’s just a matter of observation, just like Sherlock Holmes – The simple case of “why didn’t the dog bark?”

Didn’t Kodak notice that digital cameras were going to replace traditional film cameras? Didn’t Nokia realise that the market demanded smartphones, and that people who were using WhatsApp demanded Android OS? There are many stories where one can see the trends shifting, yet we chose to ignore the signs only to face dire consequences later on.

I am not saying that we will be able to forecast the future; but we can certainly tell that industries are experiencing shifts quite rapidly. I’ll list down a few of them, some of which you might already be aware of –

This trend is best illustrated by the phenomenal growth of Patanjali. Within a decade, their sales have crossed Rs. 5000 crores! In parallel, scores of smaller players have entered the market.  One doesn’t have to conduct research to spot the trend. Just check your home – your parents, or friends (those who were mocking you earlier and were using Colgate or Close-up) have started using Dantkanti toothpaste…

Apart from the obvious impact on FMCG companies, think of the impact on ingredient suppliers!

Again, I didn’t conduct any detailed survey for this. 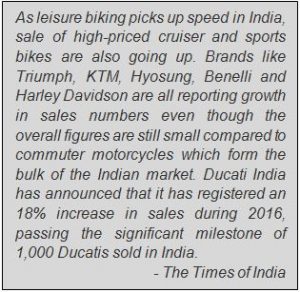 It’s just that you start noticing the number of Royal Enfield’s – which was earlier 1 in 20 bikes, and is now 2-3 in 10 bikes. I have also noticed that KTM bikes are doing remarkably well. Maybe a conjecture, but a starting point to validate my hypothesis. Even during lunch hours and chats at the water cooler, my colleagues rave about these bikes. This indicates that the premium two-wheeler market is experiencing good growth, and people are ready to spend on their biking adventures.

So how will this change the structure of the two-wheeler industry?

Of course credit goes to the demonetization drama.

It has been good for PayTM business – many colleagues have used it to pay for chai at the tapri. Now, do you really need to have a research background here? Well, so much for my degree.

A widespread adoption of digital payments will alter banking, retail, and government services – and all our lives.

In the last year, I’ve seen six of my colleagues in the 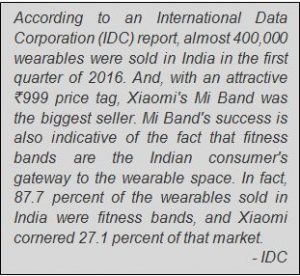 office using fitness bands – indicating a growth in health conscious individuals and the emergence of a new watch category.

So what happens to Swatch and Titan?

Although quite ubiquitous now, in the last one year, I (a technology challenged person) have only used their services to and from a railway station or airport. Yes, this has been one of the fastest disruptions I have ever witnessed.

Will this lead to a decline in three-wheeler sales, or as a matter of fact, even the sales of four wheelers? And how will it  impact auto ancillaries?

There will be many more, which I may have missed. I’m just a layman observing day-to-day changes happening around me. I imagine if you are focused on a specific industry – let’s say pharma, chemicals, or engineering – and you just keep your eyes and ears wide open, you will definitely stumble upon the shifts in these sectors, which might create a good business or investment opportunity. Detailed research can follow later to validate the hypotheses.

I would like to end this note with a quote by Sherlock Holmes – “There is nothing more deceptive than an obvious fact.”